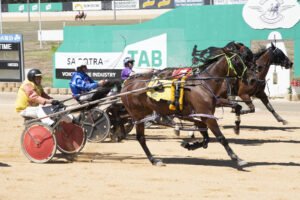 Having her 49th start, Mariahs Shadow broke her maiden status much to the joy of trainer and owner, Suzanne Grace.

Naturally thrilled with the victory, Grace stated she never doubted the five-year-old was capable of success.

“When I got her a little over a year ago she was a bit on the light side and looked very much like a young two-year-old instead of a three-year-old,” Grace said.

“She really needed to fill out and mature, which she has only really done in last six months and it’s only in the last few months she’s decided she wants to be a racehorse.

“I certainly have had to be patient with her, but I was told breeding wise she won’t come good until she is five or six.”

With Grace’s husband Stephen in the cart, Mariahs Shadow was driven for strength by being settled outside the leader, Major West.

Showing a tremendous amount of intestinal fortitude the daughter of Shadow Play reached the front in the last stride, to complete a half-neck win from the pacemaker.

“She worked so well leading up to the race and I was quite pleased with her,” Grace said. “I told my husband she will go well and she did.

“She still needs to get stronger in herself but is improving, so I will keep working on her and hope she can mature further.

“I’ll probably put her around again next Monday and then see how she goes from there.”