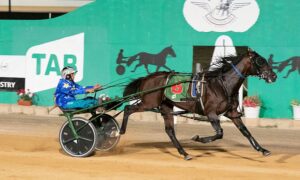 WITHOUT getting “too far ahead” of himself, astute trainer Greg Scholefield is quietly confident of registering a feature double during the weekend.

Scholefield has runners in Sunday’s Gawler Cup and Derby, including the favourite in the latter.

Winner of his last two starts, Jawsoflincoln has drawn the outside of the second row, which shouldn’t prevent the son of Art Major from completing the hat-trick according to Scholefield.

Jawsoflincoln was triumphant at Globe Derby on February 19 before scoring in Mildura three days later.

Having given the three-year-old a “few easy days” after his interstate trip, Scholefield stated Jawsoflincoln is in prime condition for the 2070-metre journey.

“I couldn’t be more pleased with the way he has come back this time in,” Scholefield said. “You can’t do much more than win both your starts.

“I gave him a few easy days after Mildura, which is a long trip we made for the better prizemoney, and it brightened him right up, with his work first rate since.

“I’m not too worried about the draw…it’s never easy, but he is going well enough to overcome it.”

Scholefield will then be represented by promising pacer Stratofortress in the Cup, with the son of Art Major going into the headline event on the strength of a second in last weekend’s Boort Cup.

To be driven by pioneering horsewoman Gaita Pullicino, Stratofortress has drawn to settle forward from barrier two.

“He was only beaten a lip and was in front a stride after the finish,” Scholefield said. “He is knocking on the door for a win and could even surprise a few on the weekend.

“I don’t want to get too far ahead of myself but with the right runs they can both win.”

see Facebook page for for information regarding the series..https://www.facebook.com/saharness.org.au