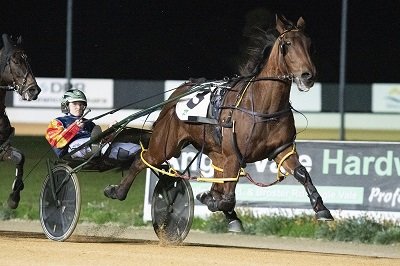 Doubles and trebles throughout the program on a balmy spring night at Globe Derby Park Wednesday night.

Paige One greeted the judge in race 1 again, after a confident drive by Darren Billinger on the favourite.  The A’Courts are enjoying good success with the 4yo mare who brought up her 3rd win for the season.

Not quite beach weather yet but Beach Goddess took out the Arclight Photography Pace at big odds.  Sitting outside the leader throughout, driver Tiana McMahon got a little busy on the Rob Caton owned and trained mare over the concluding stages to hold off a late challenge from Rosiano.

Shane Loone and Michael Smith combined for a treble on the night with the first of three going to 3yo filly Whatisaygoes, who sat behind the leader and stablemate Rockybomba for the majority of the race before peeling off on the home turn. She raced a little greenly but held off the fast finishing Roll With Mustard and Didmeselfamischief.

Old campaigner Bien Hoa NZ showed the only thing he loves more than racing is winning. Having his 29th start this season the 13yo bought up his 30th career win. After shadowing Nikks Pick for the majority of the race, Michael Smith took the old timer 4 wide with 500 metres left in the race and he ran over the leaders easily.

Skip to the last for a treble for the combination with 3 year old White Star Peejay showing good gate speed and leading all the way, winning comfortably over the favourite Persius who sat outside Smith for the majority of the journey.

Sam Pascoe’s double on the night came from two favourites. Firstly, working forward from the gate the Frank Turner trained Rocking With Charm led throughout. This brought up his fourth victory for the season and second in a row, holding on over Liberty Tee Jay who loomed up in the sprint lane.

Secondly, having his first start for the Scott Pascoe stable, Spring Delight sat back in the field trailing his main rival Opinionated, until coming three wide late in the race.  The 5 year old raced a little roughly in the straight but went on to record a comfortable victory.