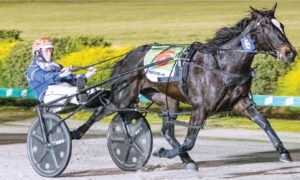 PURCHASED as a ‘worth a shot’ prospect, Soho Historia has developed into the surprise package of the season.

Having noticed Soho Historia for sale online, South Australia-based Summit Bloodstock and Aaron Bain Racing decided to take a chance with the daughter of Courage Under Fire…a decision they will never regret!

Performing modestly when trained by Bain during her first few starts, Soho Historia was then transferred to Victorian horsewoman Emma Stewart where she has rocketed to the top of her crop.

“She was for sale online for $10,000 and we felt she was worth purchasing as her form was ok and she still had her Vicbred bonus to win,” Summit Bloodstock’s Jake Webster said.

“She didn’t really set the world on fire when we first got her, but she was competitive.

“So we sent her to Emma hoping to get her Vicbred bonus and the rest is history.”

Excelling for Stewart, the filly is unbeaten from six starts, with her latest success coming in the Queensland Oaks at Albion Park during the weekend.

Driven by Mark Pitt, Soho Historia was settled midfield from barrier 11 as Steno worked to the lead.

Taken to the extreme outside on the final turn, Soho Historia sprinted to a metre-and-a-half win from Amore Vita.

“We never dreamed this is how she would turn out, but she has just improved at every start she’s had and kept pleasing Emma,” Webster said.

“Emma always felt she would be better with a sit, but given where she was during the run in the Oaks we didn’t expect her to make up that much ground.

“She was in what appeared to be an impossible position leaving the back straight.

“We made the trip to Albion Park and it was a massive thrill to be there as it was the first time we’ve been able to get to the track to win a race that big.