SA Trots - Stratofortress back to the winners circle 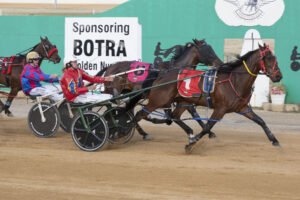 IT DIDN’T take promising pacer Stratofortress long to bounce back to the winners’ circle.

After completing four consecutive victories, Stratofortress had his streak broken when runner-up at Globe Derby on October 30.

The win earned the son of Art Major nominal favouritism for next week’s Final.

Thrilled with Stratofortress’ form this preparation, Scholefield is positive the four-year-old can capture the decider.

“He’s barely set a foot wrong of late,” Scholefield said. “He’s a nice horse still on the way up and has plenty of wins in him.

“Without seeing the draw, it’s fair to say he’s the one to beat in the Final.”

Driven by top concession reinsman Corey Johnson, Stratofortress began quickly to lead from the pole as his main danger, The Kapiti Express, was forced to work overtime on his outside.

Fending off the initial challenge turning for home, Stratofortress staved off a late charge from Dennis along the sprint lane to score by a metre-and-a-half.

The Kapiti Express battled on bravely to be three metres away third in 1:56 over 1800 metres.

Crookwell Jake secured the other heat in 1:56.6.

“Once he was able to hold the lead he was never going to be run down,” Scholefield said. “It got close enough on the line, but he had it a little easy between runs and will be better for tonight’s outing.”