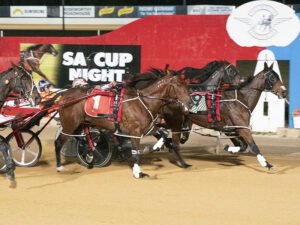 Returning to his best form in recent weeks, Wrangler will be given a short break while trainer Paul Cavallaro considers his options.

One possibility is taking the son of Bettors Delight to Tabcorp Park Melton in search of metropolitan riches.

“He’s had a long campaign since the Cup series began having had eight starts since mid February,” Cavallaro said. “Add the travel to the country tracks and a run in Mildura, and he’s had a busy time of it.

“I’m rapt to see him get back to his best during the last month or so, but I think a week off will do him the world of good.

“I haven’t made any plans beyond tonight’s Cup, so I will definitely give him a freshen-up while I decide what to do, which may even include taking him to Melton.”

With Dean Giardi in the cart, Wrangler was pushed forward from the inside of the second row to follow his stablemate, Cullenburn, which led from the pole.

Angled into the passing lane, the gelding reached the front in the last stride to score by a half-neck from Cullenburn.

Maharajah finished strongly to be a metre away third in 1:57.9 over 2645 metres.

“He only just got there in the end, but to train the quinella is a terrific result.

“I’m just rapt with the way they both went.”