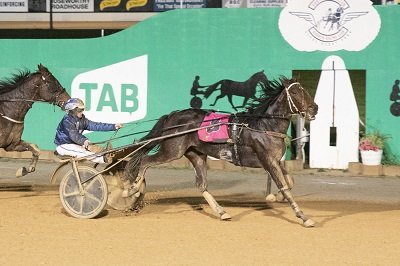 The opening race on the program was not kind for favourite punters.  After being crossed initially, Michael Smith elected to position Steam Cleaned outside the eventual leader, Jakes Sportwriter. With runners challenging from the back of the pack and the leaders commencing to tire, Dani Hill took Waitpinga Lad who was camped on the leaders back to the lead.  This allowed Dennis to utilise the sprint lane and he powered home to win by a neck.  The win brought up his hat trick for trainer Tayla Warren with the 7yo gelding and his wins are getting stronger each week.

The win also bought up the first of a treble for concession driver Sam Pascoe, who scored in Race 5 the 50th Alabar Golden Nursery October 30 Pace. Pascoe pressed forward with Van Mara NZ from barrier dispatch and parked outside the leader.  Sam said go at the 500 metre mark on the Steve Fennell trained gelding and he put the pedal to the metal, with a strong 11 metre win.

Sam capped off her treble in the last race of the night the Lynton & Steve Davies Pace, where she guided Maharajah NZ to his first victory since winning with Pascoe on board 6 starts ago. The Heather Stevens trained 4yo worked forward in the middle stages and eventually ran down the leader, Stratofortress NZ in a very tight finish.

Another treble on the night went to Dani Hill. Dani led on favourite James Charles in race 2, the Hygain Fiber Fresh Pace. She rated the 9yo Aaron Brown trained gelding well out in front, to hold on for victory over the fast finishing Major Mad.

Dani’s next two wins also bought up a double for Ryan Hryhorec as a trainer.  Firstly, in race 3 the Gotta Go Cullect NZ Series Dani sat favourite Easy Rolling in behind the leader Ammicchi, before being presented with the sprint lane in the home straight. Easy Rolling held on to a narrow victory over Ammiccchi, with spoilers trying hard on the outside in Make Haste and Wolf of West Bay.

Secondly in the very next race next the Valley Horse Transport Trotters Handicap, Caabello was lonely on the 40m handicap at the start, but stepped well and was on the back of the main group quickly. Dani sat in the shadows of favourite Muscletonian and followed it wherever it went.  Dani sat confidently on the mare into the home straight and pulled away to win by almost 5 metres, this also bought up a double for owners the Wells Family Group.

Barry Preston was the only male winner on the night in the sulky, winning with trotter Miracle Rising in Race 6, the Jive Café Trotters mobile.  Preston sat back with the consistent Frank Pullicino trained 7yo and followed Armchair Ride throughout the race, before peeling off his back and running home strongly at good odds to record a comfortable victory.