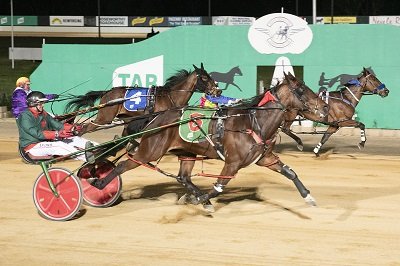 LIFE is about to get tough for Hesashark.

Speaking after Hesashark made a winning return at Globe Derby Saturday night, trainer Dale Afford stated he is at a loss as to what direction he will head with the four-year-old.

Afford’s dilemma is the lack of options for the son of Shadyshark Hanover, which has been made worse due to travel restrictions.

“I just don’t know what is next for him,” Afford said. “He’ll pick up a few more points for his win Saturday night and now has to go against the likes of Van Mara in the free-for-alls.

“He’s not up to that yet, but I don’t have a lot of other options for him here in South Australia.

“I can’t head over the border with him to try and pick up an easier race and he’s probably too high on points to get some easy option in Western Australia if I was to send him there.”

As for his latest performance, Hesashark was settled at the tail of the field from barrier six as Paige One led from gate four.

Four-wide around the final bend, Hesashark sprinted to a metre-and-a-half win from Sea Lover, with Paige One two metres away third.

“I’m pretty happy with his run especially given he had an interrupted campaign,” Afford said. “I struggled to get him right as he had a foot abscess and a few little setbacks.

“I was going to give one run before the Final, but he does go better fresh and it worked out in the end.”