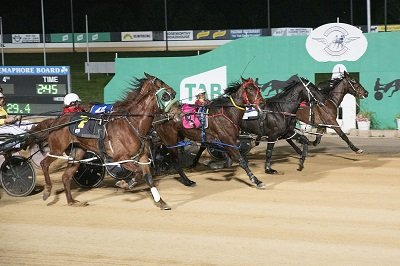 Being sent out as favourite in his first start in SA, 5yo VICTORY MEDAL NZ led from gate three. Driver Wayne Hill dictated the pace out in front and comfortably defeated TIDAL SURGE and BAYONET SOLDIER.

The double for the duo came in Race 7, the John Rothe Video Pace. Hill rolled to the front once again, this time with HUGHEY HEFFNER and held off advances over the concluding stages from ESCAVADOR in the sprint lane and SUMMERDAYS on the outside. It was only the gelding’s 6th start and with 2 wins and 2 placings in his last four starts, the 3yo son of Roll With Joe is really starting to hit his straps.

An exciting finish in the TAB Venue Mode Pace with only a head separating the first four runners.  MIDNIGHT CALM wanted the lead and Ryan Hryhorec drove him hard to find it.  There were moves a plenty behind him throughout the race, however the striking black gelding help off all challenges over the concluding stages, bringing up his 5th win for the season.

This win started the demise of favourite punters betting on the night.

Gaita Pullicino partnered the Symon Kittel trained SABREUR NZ and provided a big upset.  Gaita sat one out two back on the Melanie Kittel owned 5year old and with 350 metres to run stormed around 4 wide and produced a powerful finish, running down the leader CROOKWELL JAKE along with WAITPINGA LAD and MAHARAJAH NZ.

After striking trouble on the first turn and breaking gait, driver Sam Pascoe on AMMICHI didn’t panic. She regained her composure and sat on the pegs with the Sharon Newman trained mare, who then had a tendency to overrace. Again another exciting finish, with only a neck covering first to fourth, with AMMICCHI holding on after using the sprint lane, over CELESTIAL DAYBREAK, BIEN HOA NZ and the fast finishing ACES DAUGHTER. The 4yo has had a great season, with 29 starts providing 8 wins and 7 placings.

AUNTY ETHAL showed having good manners gets you everywhere! Stepping safely from her 30m handicap Mark Billinger sat quietly back in the field, whilst others around him worked hard and some broke.  Patiently biding his time Billinger moved from the pegs to the running line to trail second favourite HAMMER SON, until exiting the turn off the back where the leaders TEN NO SPUR, HAMMER SON and BALMORAL HALL all made mistakes.  Without breaking stride, the Robin Maguire trained 4yo mare ran strongly to the line  holding off KABAYO KING in the sprint lane and ARCTIC PEGASUS down the outside.

A top run in the last from consistent mare MILLYS MAGIC.  The Claire Goble trained trotter had been knocking on the door in recent runs and stormed back into the winners circle here, her first win since February. She was confidently driven by her regular driver, David Smith.