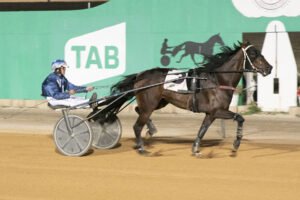 HANDY trotter Caabello has enhanced her broodmare potential with another impressive win.

With a positive pregnancy test confirmed, Caabello added to her standing as a matron by capturing last night’s Globe Derby feature.

Overcoming a 30-metre handicap, the trotter secured The Pride Of Petite, named after the dual Inter Dominion champion.

Trained by New Zealand horseman Mark Purdon, Pride Of Petite captured the prestigious series in 1996 and ’97.

Driven by Purdon during her initial triumph, Pride Of Petite was partnered by Tony Herlihy to successfully defend her title at Globe Derby.

As for Caabello, she is in-foal to exciting young stallion Elite Stride according to trainer Ryan Hryhorec.

“She’s had one positive test and will have a second soon,” Hryhorec said. “She will keep racing while she is in-foal.

“That gives her about another 100 days to get some more wins on the board before she is retired to stud.”

With Dani Hill holding the reins, Caabello worked forward to find the lead as early front runner, Swaffham Success, was eased to take a trail.

Redriverdebba was four metres away third.

“She has been flying lately and was ready to win,” Hryhorec said. “I was pleased with the way she found the line, and on that run, it’s fair to say she can win some more before she is retired.”