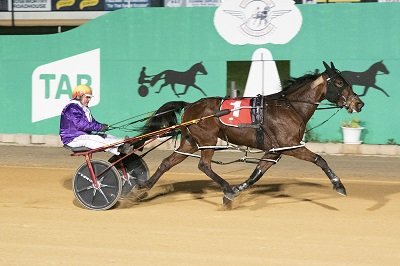 There was no extinguishing the delight of the A’Court family when Paige One won at Globe Derby Park on Saturday.

To make the win very emotional, is the fact the mare was near death earlier this year with blood issues.

Paige One is owned by Belinda A’Court, her brother-in-law Rob A’Court and his son-in-law fitness guru Sean Baker.

The winner is trained by Belinda’s husband Steve, who with his brother Rob, are former firemen with a passion for harness racing.

“It was a fantastic thrill,” Steve A’Court said.

“Actually, I found it all a bit unreal post-race.

“I couldn’t believe she had won, but it became a lot more real when Nicolle Rantanen Reynolds (HRSA Board Member) came up and asked to have her photo taken with us.”

The A’Court brothers went to the 2017 Allwood Yearling Sale at the Magic Millions complex and were able to purchase the mare for about $10,000.

Rob A’Court is very passionate about the breeding side of the industry, and uses pedigree matching which originated in Canada.

Paige One was from the first crop of her sire Sunshine Beach.

“She is from a very good New Zealand family,” Rob A’Court said.

“There is not as much black type as some breeders would like, but it is a very winning family which is getting better.”

The mare was brought along slowly, as the brothers always felt she would be better with a bit of age and racing against her own sex.

She had just one start as a two-year-old before coming back as a three-year-old to win at Gawler.

Just as she was starting to make progress the mare suffered a superficial tendon injury which halted her career for several months.

Late last year, the mare took ill with her blood issues and every time they gave her antibiotics, she seemed to get worse, not better.

However, perseverance and tender loving care worked wonders and she is now ready to make her mark on the racetrack.

This time in, Paige One won first up at Globe Derby before an unplaced run, then a second to The Queen Of Heart in the Prelude last week.

On Saturday, Billinger had no trouble holding the lead from gate one and was able to get away with a very moderate first quarter of the last mile of 32.4 seconds.

Paige One sprinted home her last 800 metres in 57.3 seconds which was always going to make it very hard for any of her rivals to catch her.

An added bonus was the Billinger wore the colours of the A’Court brothers’ father and grandfather.

Paige One now has three wins and five seconds from just 14 starts earning $27,671 in stakes.