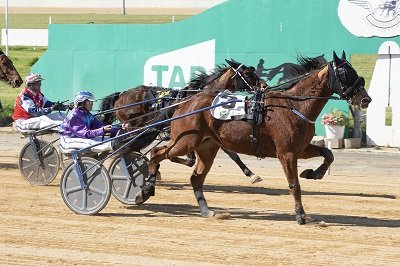 As it’s not polite to ask a woman her age it’s unclear what milestone Neilson reached, but what is public knowledge is the trainer registered a surprise treble.

Neilson’s trio captured the opening three events on the card.

“After the first two won I wondered if miracles do happen, and as it turns out, they do,” Neilson said.

“The third of them is no star and pretty much stays around as a family pet because my grandson Ben loves her.

“She is very gentle with him and he can walk up to her with no worries.”

Beancounter kick-started proceedings when he led throughout with Wayne Hill in the cart.

Rating 1:58.3 over 1800 metres, the son of Art Major accounted for Tidal Surge and Speak Easy.

“I thought he was a solid chance and he ran up to expectations,” Neilson said.

Neilson then combined with Dani Hill to emerge triumphant with Lovelorn, which overcame a 20-metre handicap in a snail-like 2:09.8 over 2230 metres.

Unbeaten from two starts this season, the son of Love You scored from Our Spitfire and Arctic Pegasus.

Dani completed the miracle when she guided Georgie Mae to a half-neck victory from Liberty Tee Jay.

“Georgie Mae tries her best and picks up enough to buy the chaff,” Neilson said. “I know it’s a business, but sometimes you’ve got to go with your heart, which is what Georgie Mae is.”