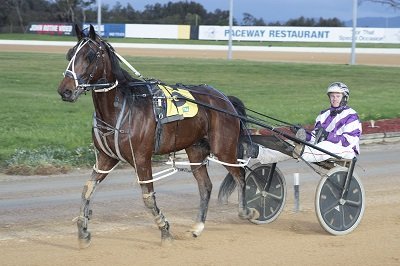 Race 1 saw the northern trained Charging Bull hold the lead from barrier one with White Star Venus punching the breeze.  Driver Ryan Hryhorec dictated terms with a sneaky slowish second sectional out in front and the 3yo gelding held on for the narrowest of wins over White Star Peejay.  The favourite, trained by Martin Schrader has been placed at his last two starts and got his break through today.

The rain came for the second race and so did the first of a double for Samantha Pascoe.  Favourite Crowded Reactor showed good gate speed and led from the get go.  Pascoe said go at the 400 and pulled away with the runs coming wide from the back of the field with Sabreur and Semiramide who filled the placings.

The second leg of Sams double came in sunshine! This time round BAYONET SOLDIER showed great pace to lead from barrier six and Sam controlled the race out in front with the 9yo gelding who was having his 9th start for owner/trainer Stephen Allen.

Proving to be a leaders track with another winner leading from dispatch.  This time it was Wayne Hill on Hughey Heffner from barrier six who led and looked comfortable out in front and cruised in for his debut victory.  Trained by Tayla Warren the 3yo black gelding has had 5 career starts for 1 win and 2 placings

Skybreeze was driven through strongly from the second row by Corey Johnson and eventually rolled to the front and became yet another leader to win.  The striking trotter trained by Lane Johnson didn’t put a foot wrong and cruised to a comfortable victory making it 3 on end and his 5th from only 7 starts.

Always around the mark just needing a bit of luck in its runs Martys Party certainly got that today.  John Lee sat quietly back in the field before taking off around the 500 and running quickly to the leaders and surpassing them.  The 5yo was at his best today and cruised to a near 8m victory for owners John and Tiffany Lee.

Leading easily from barrier 3 and being left alone with no challengers saw an easy victory to Rocking With Charm in the Tab Make a Date With Play Pace.  The 8yo gelding trained and driven by Frank Turner bought up his third win for the season holding off Grinfaron who sat outside the leader throughout.

Following Happy Max in the one one the moves happened for Ymbro Bump around the 700,  First going wide, before heading back to the pegs and then utilising the sprint lane, driver Wayne Hill found the fastest way home for the 9yo gelding delighting Tom Olsen with the win in the Tab Live Sky Racing Vision Pace.

Michael Smith eased Wolf Of West Bay back from the barrier to find a position following Mackalan who found the one one. When that horse went three wide Wolf Of West Bay followed suit and continued a three wide run catching the leaders and getting up at good odds. Trained by Bronte Giorgio the South East owned 4yo bought up his third win for the season.