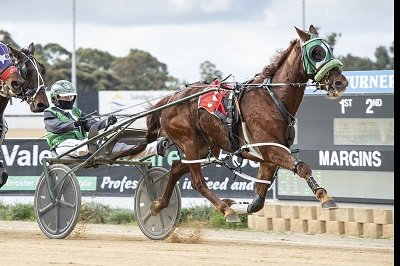 Talented 3yo trotter ALDEBARAN DIANNA continued her picket
fence bringing up her 4th win in the first race the Bianco
Reinforcing Trotters mobile.  Having her
first mobile start in SA, regular driver Dani Hill sat at the tail of the main
group after dispatch before setting the filly alight at the 400 metres and
cruised to a comfortable victory chalking up 4 wins and 2 seconds from only 6
starts for the Ryan Hryhorec stable.

Trainer Tayla Warren has her stable firing with MASTER
CARIBBEAN improving with every start.
Mark Billinger chose to sit behind the leader OVERPOWERING in the second
race, the PRONTO UNITED SERVICES PACE and it proved the winning move, easing
out on the home turn to run down the leader right on the line winning by a nose
in a fast mile rate of 1:57.6 and taking his SA wins tally to three.

Another regular to the winners list in the third race was
JUSTANEXTRAGRAND.  Wayne Hill restrained
from the gate and sat at the tail until tacking on for a trail three wide on
the back of MONEYMAKINGMONKEY with a lap to go.
Taking a while to wind up the Aaron Brown trained gelding stoked up and
ran to the line well in the Mitavite Studgro 3yo pace

Showing dashing gate speed 5yo gelding CROWDED REACTOR
headed to the front and never looked back.
Racing fiercely at times for driver Sam Pascoe, the Scott Pascoe trained
chestnut easily accounted for his rivals in the Angle Vale Fodder &
Hardware Pace despite the early challenge it received.

The Shane Loone trained BIEN HOA rolled to the front from
barrier 3 in the Horsemedsa Hills Equine Clinic Pace and driver Dani Hill
dictated the terms out in front.  The
veteran (13yo) held on in a tight go giving Dani a double for the day, with the
fast finishing HAPPY MAX looming up on the outside to grab second.

The Tab Make a Date with Play Pace saw Ryan Hryhorec sit at
the back of the pack with 4yo DAMYSUS before taking off three wide with under a
lap to go.  Still putting in a few rough
strides the Michael Sugars trained gelding, in only his second race start
sprinted around the field and rounded up the leaders easily cruising to a 4
metre victory, his second win from only two starts.

Driver Tiana McMahon on board LETS GO THERE restrained at
the start to settle near the tail of the field in the HYGAIN REGAIN PACE,
before tacking on the back of POWER PASS for a three wide trail with just over
a lap to go.  Working hard being left out
three wide from the 600 metre mark Tiana drove a confident race on the 5yo who
held on in a tight finish.

The field took a while to sort their positions for the last
race on the day and driver Gaita Pullicino settled near the rear with
TWOBOBJACK.  Gaita worked hard keeping
the geldings mind on the job, chipping away at the gap to the leader.  The Frank Pullicino trained gelding flew down
the outside in the home straight to claim victory in the Tab Live Sky Racing
Vision Pace.