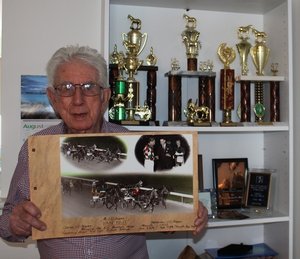 Today it is Greg and Kylie Sugars who are in the form guide, before them it was their father Ross, a Living Legend and world record holder, but the patriarch of the family was ‘L C’ Leonard Charles Sugars.

Sugars drove his first winner in 1948 but it was in the 1960s and early 70s at Wayville that his stable became a household name. That success followed the family to Globe Derby Park and now the family’s involvement is in Victoria.

Sugars prided himself in his appearance and was always immaculately groomed and smartly dressed when out and about.

He loved passing on his knowledge to anyone who sought help and everyone who came in contact will be able to relate one of his humorous stories.

A butcher by trade, Sugars started training at Klemzig with the main meetings at Wayville, but when harness racing moved to Globe Derby Park in the 1970s, he sold up in 1973 and purchased a property at Virginia with the plan to allow Ross to launch his own training and driving career. He did not renew his licence after 1986.

Ross Sugars became a star trainer-driver which led to his eventual move to Victoria in 2004, but Len Sugars remained at the property until 2015 before moving into a retirement village at Hope Valley, and more recently the nursing home within the complex, where he saw out the remainder of his life.

The Hall of Fame trainer loved following the successes of his grandchildren Greg and Kylie and watched all their drives on Sky Channel.

Daughter Christine last week showed him the race and post-race interview of Greg Sugars’ Group One success on Triple Eight in the Caduceus Classic at Bendigo which the nonagenarian loved.

First Rank was the first good horse prepared by Sugars, but Van Nut was his pinup during the Wayville days.

Van Nut was one of SA’s best pacers and his wins included the 1965 Easter Gift, 1966 Gawler Cup and the Minor Derby Free for All the same year.

Later, he prepared the champion mare Royal Arena which was another of his favourites.

Royal Arena suffered a tendon injury which stopped her from fulfilling her full potential, but she did win the 1985 Gawler Cup and also ran a faster time in her Consolation win than champion Gammalite did in winning one of his four South Australian Cups.

The Sugars’ colours of white, red and green squares is synonymous with success, but his first set of colours were lilac with blue sleeves which Royal Arena carried in winning the Gawler Cup.

“They were exciting days,” Sugars said in an interview before the return to the track for the `Return to Wayville meeting in October 2017.

“The atmosphere was electric with the crowd encompassing the track and they always made plenty of noise”.

“He won about 26 races and really set up my stable and I’m sure someone was looking over me when he came about,” he said.

“I wanted to breed a horse by Van Derby out of a Raider mare, so I advertised in the paper for a suitable mare and a Mrs. McIntosh answered my call with a mare called Nell’s Choice.

“When Van Nut was only 22 months old, he won seven trials at Klemzig and Campbelltown under the name Sonross.

“For some reason when I tried to name him Sonross it wasn’t allowed and when I took him to the races, he was called Van Nut. His first start was at Kapunda, and we got 40/1 because very few knew he had trialled as Sonross.

“He was a brilliant beginner and led easily and coming to the home turn he was set for an easy win but in those days the track sloped away and with the dip he struck himself, galloped and finished fourth.

A career highlight for Sugars was the introduction to race driving of his son Ross.

“I drove a horse called Perkandi at Wayville back in November 1977 and he was a 6/4 favourite, and I was happy to sit three wide waiting to make a run, but another driver came up four wide and put me in a pocket,” Sugars said.

“I leant across and tried to push him out of the way. After the race, the stewards called me in and asked me what happened and were going to give me a two-year disqualification.

“I told them I was driving the red-hot favourite and anyone who came outside me had ulterior motives and they said because I was so honest, they only gave me a three-month suspension. I said that was okay because my son Ross had a permit to drive and could start driving.

“The following Saturday Ross had three drives – Red Score, Hallett and Perkandi – all trained by Sugars, and they all won. It is a world record that still stands for a driver to win at his first three drives, all on a city track and as a B grade licensed driver.”

Len was a titan of our industry in SA, and his passing is a loss to many. HRSA sends its sincerest condolences to the Sugars family during this time