SA TROTS - Whistle On By is on fire 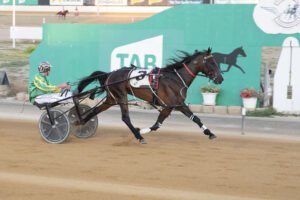 ANOTHER interstate trip is on the cards for in-form mare Whistle On By.

With the daughter of Major In Art racing in sensational fashion, trainer Donald Thomas plans to “strike while the iron is hot”.

Before the 82-year-old horseman undertakes the long journey across the border Whistle On By has to perform to expectation at Globe Derby tomorrow night.

“I can’t ask for much more than what she has been doing as she has turned corner in last three or four months,” Thomas said.

“I took her to Mildura before Christmas and she won there so I wouldn’t mind taking her back while she is racing so well, you know, you’ve got strike while the iron is hot.

“It’s a long trip, but you’ve got to go to Mildura when you have the right horse to chase the better prizemoney as we’re struggling as an industry here.

“First she has to go well on Saturday before I make any set plans with her.”

To be driven by Michael Smith, Whistle On By has drawn to be sent forward from barrier five.

Early markets have the seven-year-old listed as a $1.70 favourite, with Absolution considered the main danger at $5 from gate four.

“I would think she’s a pretty good chance again from that draw,” Thomas said.

“A lot will depend on the start as there is a couple which have got a bit of speed there, but I don’t think she has to lead to win.

“She has shown she can win when driven with a sit.”