SA TROTS - Dani leading the way for a great cause 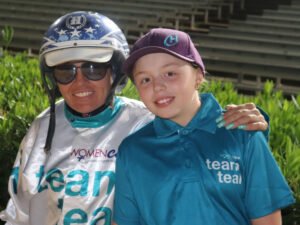 ARTICLES of Dani Hill’s remarkable presence during the teal pants campaign have been well-covered, but that can’t prevent more new of her efforts.

Hill, along with close to 300 reinswomen throughout Australia and New Zealand, Hill is sporting specially-designed driving pants between February 1 and March 15 as part of the extraordinary crusade to raise crucial funding and valuable awareness towards ovarian cancer research and education.

Each state’s governing body, various principal clubs and the TAB have combined to donate $400 to WomenCan per victory.

Western Australia has taken a different approach and is donated $15,000.

In its eighth year, the Teal Pants Campaign has raised more than $2million.

As for Hill’s contribution, well, she has simply been awe-inspiring.

In 2017 Hill led the team with 32 wins before repeating the dose in 2018 – a remarkable feat considering the limited opportunities in South Australia compared to other states!

Missing the 2019 campaign due to injury, Hill was again SA’s main contributor with a dozen victories in 2020 and registered 21 wins to top the table once more in 2021.

With the latest campaign beginning four weeks ago, Hill is yet again the most prolific winner with 23 victories.

Dominating her home state during the weekend, Hill won nine of the 13 races across two meetings!

Thanks to Hill’s success behind Mass Destruction in the Strathalbyn Trotters’ Cup, Team Teal notched its 200th Australian win of the campaign.

Trained by Ryan Hryhorec, Mass Destruction led home a stable trifecta as Aldebaran Alissa and C K Spur filled the placings with Lisa Ryan and Michelle Phillips in the cart.

“It’s all the more special to get some wins on the board during teal pants time,” Hill said. “It will be awesome if I can keep the ball rolling.

“Every win helps and the ladies all over Australasia have already been making plenty of trips to the winners’ circle in the first week.

“It’s a wonderful charity to be supporting and I, like all the reinswomen, will be doing my best.”