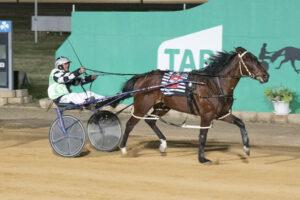 RISING star Justanextragrand has been sent for a well-earned break.

Stretching his winning streak to five following a narrow but gutsy victory in last night’s St Leger at Globe Derby, Justanextragrand will spend the remainder of the season in a paddock.

Pleased with the three-year-old’s progress, trainer Aaron Brown stated he will give Justanextragrand “a good long spell” before attempting to make the transition to open company next season.

“I was working for Kevin Charles in Western Australia when he was training the horse and I liked what I saw,” Brown said.

“So I bought him thinking he would be ideal for South Australia and so far he has more than lived up to expectations.

“I’ll give him a good long spell now and bring him up slowly again next season.

“He’s still immature in the body, but everything he has shown suggests he can get to free-for-all here.”

With leading reinswoman Gaita Pullicino in the cart, Justanextragrand began quickly from barrier five, but was unable to cross Artillery, which led from gate four.

Despite working overtime in the ‘death seat’ Justanextragrand forged his way to the front in the shadows of the post to score by a half-head from the pacemaker.

“It took the whole race to get there, but he did which is the main thing,” Brown said. “He was a tired horse after the race, but deserved to be after the run he had.

“The break should do him the world of good and hopefully he’ll come back just as good, if not better, next time in.”