SA Trots - Jawsoflincoln has eyes on the prize 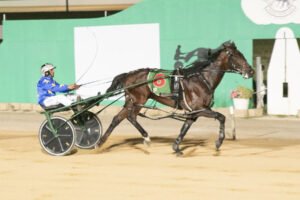 Sent across the border to respected horseman Greg Scholefield last month, Jawsoflincoln made a winning debut by capturing the Lordship Stake at Globe Derby a fortnight ago.

Returning to the troubled venue during the weekend, the freshman captured a heat of the Alabar Golden Nursery.

Thrilled with his latest stable acquisition’s performances, Scholefield is confident Jawsoflincoln can continue his perfect record in Saturday night’s Final.

“He hasn’t set a hoof wrong since he got here,” Scholefield said. “I’m pretty pleased with what he has done so far and expect him to keep improving.

“He’s got the Final on Saturday night, and without seeing the draw, I’d reckon it’s fair to say he is the one to beat.”

With Gaita Pullicino holding the reins during his latest triumph, Jawsoflincoln led throughout from barrier six to score by five-and-a-half metres from Ever Hoping.

“He did it quite easily,” Scholefield said. “Gaita never had to go for him and he had a bit up his sleeve on the line.”

Following his pending assignment, Jawsoflincoln will be kept fresh as Scholefield primes the son of Art Major for next month’s Southern Cross heats.

“The Southern Cross is the main reason he was sent over,” Scholefield said. “So far everything is going according to plan.”