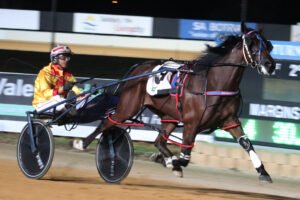 Exciting SA pacer Rupert Ross will head across the border to find out if he can measure up against Victorian opposition at Melton on Saturday night.

Times are tough in South Australian harness racing, but the emergence of a couple of young stars has certainly boosted morale.

Last season, an SA-owned and bred filly, Encipher, dazzled her way to being crowned Australian 2YO Filly of the Year.

Encipher, owned and bred by Tyson Linke but trained in Victoria by Emma Stewart and Clayton Tonkin, looks set to pick up where she left off with her only run this season a track record-smashing and outrageous 54m-winning margin in the SA Oaks at Globe Derby on May 14.

Now another young SA pacer, Rupert Ross, has set tongues-wagging in his home state and will try to do an “Encipher” and come across to Victoria to conquer some of the best of his age at Melton.

Buoyed by two impressive Globe Derby wins from as many starts, trainer Lance Holberton is taking Rupert Ross for Saturday night’s Sapling Stakes for 2YO colts and geldings where he will take on exciting locals like Major Celebrity, Little Louie and Dougs Platter.

Just to make life harder, Rupert Ross will have to overcome the outside barrier (gate seven) in the 1720m feature.

“We’ve got the visitor’s draw, but we’re giving it a shot,” Holberton said.

“He trialled last Sunday against older horses and ran well, so he’s raring to go.

“It won’t be easy from the (wide) draw, but there’s nothing here for him and it’s a chance to see where he stacks up against some good ones in Victoria.

“It’s also an educational trip for him. It’ll do him the world of good and he’s still maturing all the time.”

The Rupert Ross story has captured the hearts of most in South Australia given he was bred by Mark Webster, who lost a long battle with cancer last December at the age of just 58 and after a hugely successful 40-year career in harness racing.

At a time Webster’s wife, Carolyn, and children Anthony and Laura so badly needed it, Rupert Ross has become a focus and legacy to Mark for them and many others.

Adding extra layers is the fact Mark Webster named Rupert Ross after his father, Rupert Ross Webster, and one of his final wishes was for Holberton, his close friend, to train the youngster.

“They were a couple of Mark’s last wishes, that the horse be named after his father and that Lance train him. It meant a lot to him,” Carolyn Webster said.

“It’s so special to us all to have this horse come along as a memory to Mark. He would be absolutely rapt with what he’s shown so far. You wait all your life for a horse like him, there’s a long way to go, but he looks so exciting.”

Carolyn, Anthony and Laura are all making the trip to Melton to be trackside on Saturday night.

Holberton, himself a decorated horseman, is buzzing about Rupert Ross’ potential.

“I’ve had some beautiful horses over the years, but he’s right up there. He’s a special animal. He is potentially the best horse I’ve trained,” he said.

“But the best part of it all, is sharing the ride with Carolyn and the kids. It’s so special and hopefully it’s just the beginning.”