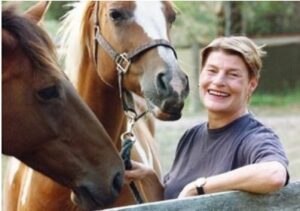 Much has been written this week of Trish and her influence on the veterinary profession, her shaping of the national animal health, welfare and disease response landscape, and the generous mentorship she provided so many during her amazingly full life – but it is her selfless, yet powerful and lasting contribution to our industry that we should remember her the most.

I was reminded earlier in the week by Dr Tony Britt that Trish worked for the then Harness Racing Board (Victoria) in the late-1980s as Registrar and a Veterinary Steward, but it was during Equine Influenza (EI) in 2007 that I first observed her uncompromising defence of science, mixed with the sensitivities of a practical and fair approach to problem solving.  She found solutions when most found excuses.

The good news for harness racing was that Trish’s affection for the Standardbred and its “people” which was built during the 1980’s, led to a wonderful association over the past 12-years which produced an everlasting imprint on our sport.

During that time, Trish was an uncompromising advocate for our industry across all levels of government and in all manner of Commissions and Reviews.  Totally voluntary, she held formal representation positions within structure of emergency animal disease responses, providing high level technical advice on biosecurity and maintained a watching brief for the equine industry during her frequent appointment to disease response plan reviews and writing groups.  She helped write the Japanese Encephalitis Virus (JEv) response plan in the 1970’s and represented Harness Racing Australia in the technical planning group (CCEAD) responding to the current JEv outbreak until the Thursday before her passing.  In recent times she attended JEv meetings and working groups on our behalf from hospital, where while receiving treatment would pass the phone to her magnificent husband, Gary, who would scribe for her (she would want it noted that Gary has signed the requisite Confidentiality Deeds).  She would have it no other way, welcoming the distraction and occupying her mind by anticipating the next steps.

Until Saturday morning, Trish was the inaugural Chair of HRA’s Standardbred Welfare Advisory Group (SWAG) where she had been instrumental in developing and advising on health, welfare and traceability policy.  Policy which is the envy of the equine world, and something all within our industry continue to play an important role.  Something she was immensely proud of… and I can hear her now saying we all should be.

While she will remain unknown to most, we have all been the fortunate beneficiaries of Trish’s involvement in our sport  She has helped protected us from disease, helped insulate our social licence, helped maintain business continuity at times when it seemed dire, while being an amazing mentor and source of invaluable insights for key staff.

Much loved, Trish will be sorely missed by so many, but our thoughts and sympathies remain with Gary at this time. An amazing, humble man in his own right who was so generous to share her.

Note: the life of Dr Patricia Ellis AM will be celebrated at a Memorial Service Wednesday, 18 May, at the Yarra Valley Racecourse.

The link to watch the memorial live is http://www.vividstream.net/patricia-ellis