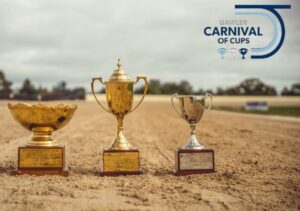 A conversation 18 months ago will come to fruition at the Gawler Harness Racing Club circuit on Sunday with the first race meeting of the inaugural Gawler Carnival Of Cups.

Early last year at the club’s newly installed swimming pool, Shane Collins, Chief Executive of the Gawler & Barossa Jockey Club was chatting to harness trainer Aaron Bain about the strength of the three racing codes in the Gawler and surrounding area.

The idea came to have a week of racing encompassing the three codes – thoroughbreds, standardbreds and greyhounds and promoting the township of Gawler.

All loved the idea and the date, a week in October, was the choice.

The GBJC run its Cup meeting in late October to coincide with the Manikato Stakes meeting at Moonee Valley so that was the week.

The Gawler greyhounds were happy to bring their Cup meeting forward a fortnight and the Harness Club contacted HRSA about running a meeting.

The three clubs formed a board to bring everything together with Aaron Bain appointed the director of sponsorship and marketing.

As part of the promotion, there will be a leading trainer award at each meeting.

The successful trainer at the harness and thoroughbred meeting will receive $1000 fodder supplied by Hygain, and for the greyhound trainer, they will receive $500 fodder vouchers courtesy of Gawler Stock Feeds.

As the plan was coming together for last year, the Covid-19 restrictions hit hard forcing the postponement of the Gawler Carnival of Cups until this year.

Because the Gawler Harness Racing Cup is staged in March as part of a harness racing Cups circuit, the club had to produce a new race to be part of the Carnival of Cups.

After some discussion, a rising star concept was settled on, and the quality of field for the $9999 TAB Gawler Platinum Pacing Cup (2070m) for four and five-year-olds suggests it was a winning move.

A capacity field of 10 will score up behind the mobile barrier in race seven on Sunday at 4.25pm SA time.

But there are a number of in-form pacers coming through the grades which will be able to test their highly rated rivals.

With Ryan Hryhorec in the sulky, Regal Scribe dashed home quickly in the 1800 metre trial being most impressive.

Hryhorec was unable to drive at Gawler because he has two horses in the TAB Gawler Platinum Pacing Cup – This Is Bill which he will drive, and last-start Globe Derby Park winner Waitpinga Lad to be driven by champion reinsperson Danielle Hill.

Hesashark returned to winning form at Globe Derby Park on September 25 in the 4YO Allwood Stud Series final rating 1:58.1 and will further improved for Sunday’s race.

Classy mare In Shoobees Shoes is also resuming from a spell and has drawn poorly in gate six, the extreme outside of the front row.

Trainer-driver Dean Girardi was happy with the mare’s trial win at Gawler on October 3 when she rated 1:59.0 over 1609 metres.

One horse bound to have a large supporter base is The Kapiti Express, part-owned by the Aaron Bain Racing Lads Club which has 250 members.

Starting from barrier two, The Kapiti Express will be prominent for a long way and should give his owners something to cheer about turning for home.

The inaugural Gawler Carnival of Cups has already achieved its goal of promoting the three codes in Gawler with excellent crowds confirmed for each of the Cup meetings.