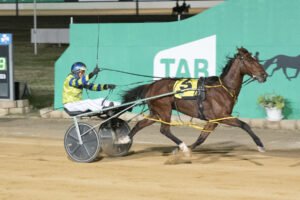 Roseworthy husband and wife Toby and Lisa Ryan have done their part to provide a get well tonic for Mount Gambier trainer-driver Andrew Clarke.

Trainer Toby and driver Lisa have won races over the weekend with the two horses left with them by Clarke a week earlier.

On Friday, Clarke, while out working six horses on his Mount Gambier property, discovered he has lost his ability to speak.

“I had a phone call and found I couldn’t string words together so I knew something was wrong,” Clarke said.

“I fed up then took myself to hospital and was admitted.

“They are still not sure what caused the speech loss but one of the thoughts is that I might have had an adverse reaction to my Astra Zeneca jab.

“However, my speech is a lot better now and I’m hoping to be discharged on Tuesday.”

“I took a team of five to Globe Derby Park on Saturday, October 9 and decided to leave the two best ones with Toby and Lisa.

“With borders closed, the cost of travel from Mount Gambier and the prizemoney levels made sense to leave a few in Adelaide.”

Starting at the massive odds of $151, Abstractor, the first Clarke runner for the Ryans, led throughout at Globe Derby Park on Saturday winning the Mitavite Studgro Pace (1800m). ‘

“If the race had been 1800 rather than 2230 the week earlier, I believe he would have been in the finish.

Clarke’s daughter Jodie sent him a text message saying he was big odds, then sent another text saying he had won.

“On Sunday she came into the hospital, and we watched Urgoodboy win on her phone.

“Toby and Lisa are wonderful people and I’m glad the two horses won for them. Maybe I will have to send a few more up.

“I believe they will more than pay their way in Adelaide.”

Clarke said provided he was released from hospital tomorrow, he would be back in the sulky working his team on Wednesday.