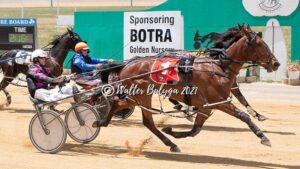 HE’S begun his career in a better manner than his dam, but the chances of him forging a more successful career a slim.

That’s the view of trainer Claire Goble, who also bred and owns the youngster in question.

Making his debut at Globe Derby Monday, Clarenden Legacy was triumphant over 1800 metres.

The three-year-old’s mother, Clarenden Serene, was fifth during her maiden trip to the track before winning her next two starts.

Overall, Clarenden Serene – which was also bred, owned and trained by Goble – registered 12 wins and 14 placings from 32 starts.

Sure Goble is pleased with Clarenden Legacy’s performance, but the respected horsewoman doubts the gelding can accumulate such an impressive record.

“He is a nice type, but just a real bread and better horse,” Goble said. “I think he can win a few races along the way, but he’ll have to improve a lot to measure up to his dam.

“He’s started the right way though!”

With talented concession driver Corey Johnson in the cart, Clarenden Legacy led from the pole before being eased to take a trail behind Triplets.

Desperate for an opening along the back stretch, Clarenden Legacy was forced to the extreme outside turning for him.

Unleashing a solid sprint, the son of Cullens Legacy scored by a metre-and-a-half from Rocky Monaloo.

“I was very happy with the way he finished it off,” Goble said. “It was also a good drive from Corey who drove him exactly how I said.”