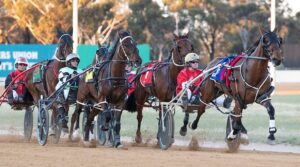 AFTER two runs from a spell, top youngster Artillery is “close enough” to peak fitness.

Priming the son of Art Major for his Southern Cross title defence, trainer Paul Cavallaro is using Saturday night’s Globe Derby program to “tighten” Artillery ahead of the heats on November 27.

Should all according to plan, Artillery will then contest the Group Two Final the following week.

“I’ve been happy with his runs so far,” Cavallaro said. “He’s had a couple of starts this time in and is working back to his best just in time for the Southern Cross.

“Saturday night’s run will tighten him up nicely before the heats a couple of weeks later.

“So far everything is spot on where I want him to be at this stage of his preparation.”

With Mark Billinger to take the reins, Artillery has drawn barrier seven – the outside of the front row.

“My bloke is in need of the run still, but he is a close enough to his top,” Cavallaro said.

“I’m confident he can win, but whatever he does this week will be a huge benefit for the Southern Cross.

“Ready To Rock has always shown ability but has really come along this season and is the one to beat.

“That said, if I was driving, I’d want to be behind Artillery.”