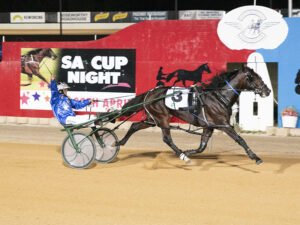 HAVING successfully completed his first main mission of the season, talented youngster Jawsoflincoln will be given “an easy week” before a new target is established.

After setting the benchmark during the qualifiers, Jawsoflincoln was too good in Saturday night’s South Australia Derby at Globe Derby.

Rapt with the three-year-old’s performance, trainer Greg Scholefield is yet to determine Jawsoflincoln’s short term goals, but has firmly set the Southern Cross as the ‘end game’ later in the year.

“I couldn’t be happier with him,” Scholefield said. “He won two of the country Derbys and probably should have won three, but he just wasn’t right when he finished third in Victor Harbor a couple of weeks ago.

“I had a little issue with him, but was able to rectify that and he was back to his best for the big one last night.

“He’s come through the run in great order and I’ll give him an easy week now while I decide where to head with him next.

“I don’t really know what is around for him as I haven’t looked beyond the Derby, but he will certainly go in the Southern Cross towards the end of the season.”

With regular driver Gaita Pullicino holding the reins, Jawsoflincoln began quickly to lead from barrier three as his Victor Harbor conqueror, Ever Hoping, working on his outside.

Striding clear of the pack at the bell, the son of Art Major was never seriously challenged on his way to 13-and-a-half metre win from Ever Hoping.

“He got a little keen on Gaita and over raced a bit, but was still too good for them,” Scholefield said. “Gaita never really had to move on him and he got to the line under his own steam.”