2022 SA Cups Series Mass Destruction puts points on the board 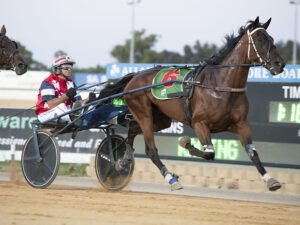 THRILLED with his success in the ‘opening round’, leading horseman Ryan Hryhorec is planning a regular assault on the Cups circuit.

Hryhorec kicked-started the series on a winning note when Mass Destruction outclassed his rivals in the Gramel Cup at Globe Derby last Saturday night.

With Strathalbyn poised to take centre stage on Sunday, Hryhorec plans to have at least two runners in the Cup, with Mass Destruction an unlikely starter.

“I’ll have two runners in the Strathalbyn Cup at this stage, but Mass Destruction more than likely won’t be one of them,” Hryhorec said.

“He made the trip to Ararat last week and raced at Globe Derby this week, so I might give him the week off.

“I’ve got until nominations close to make up my mind, but at this stage that is the way I am leaning.”

As for his latest performance, Mass Destruction began well from his 10-metre mark before Hryhorec sent the son of Muscle Mass forward to find the lead during the middle stages.

Striding clear of the pack along the home straight, Mass Destruction cruised to a nine-metre win from Reils.

“You can never be too confident coming off 10 metres, but I knew he was ready to run a big race,” Hryhorec said.

“Once he got to the front I didn’t think they would run him down and he finished with a bit up his sleeve.”