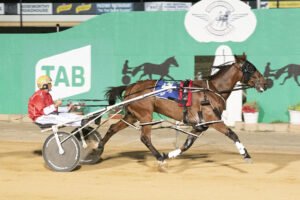 MAKE no mistake about Artillery’s allegiance.

Although racing in New South Wales, Artillery may as well sport ‘City of Churches’ silks.

Artillery is primarily owned by a South Australian-based syndicate headed by astute horseman Paul Cavallaro, who originally trained the son of Art Major before making the decision to send him to Belinda McCarthy.

Cavallaro followed a similar path with Artillery’s older brother, Culture King, which thrived for ‘Team McCarthy’ before tragedy struck when he almost died after contracting a virus.

“He may be over in Sydney, but make no mistake, he is representing us South Aussies each time he goes around,” Cavallaro said.

“If he happens to win the Final at Menangle on Saturday night it’ll be a South Australian win and a good opportunity to invest more money into our local industry especially with our yearling sale coming up.

“Given the good run we had with Culture King, and knowing Artillery was still on a light mark, I suggested to his owners it would be beneficial to send him to Belinda and Luke.

“It has already turned out to be a good move.

Successful in his heat last weekend, Artillery has drawn to complete a clean sweep of the Autumn Series at Club Menangle.

Although he received barrier three in the Final, the emergencies have drawn one and two meaning Artillery slots into the pole once the pair are taken out of the equation.

Thrilled with the four-year-old’s draw, Cavallaro believes Artillery is capable of breaking 1:50 over the mile if needed.

“When he finished second three starts ago his personal time was 1:49.8,” Cavallaro said. “That’s more than two seconds quicker than his best winning time.

“It’s a strong field with a lot of form and speed around him, but he’s got a terrific draw and should be able to make the most of it.”