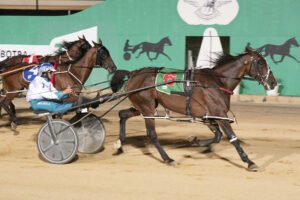 A CHANGE in plans is likely to spell disaster for those originally breathing a sigh of relief ahead of Sunday’s Strathalbyn meeting.

With the son of Washington V C and his Les Harding-trained stablemate, Im Full Of Excuses, “bucking their brands off”, however, Butterworth decided to enter the pair in the provincial feature.

Owning pacers and trotters throughout Australasia, the Victorian-based Butterworth races his stock with his wife, Meg.

“The Strathalbyn Cup wasn’t part of the plan this time last week, but things do and have changed,” Butterworth said.

“Les said they have both come through their runs so well they’re bucking their brands off so they may as well go around again.”

To be driven by premier reinswoman Dani Hill, Jimmy Mack has been handicapped by the preferential draw which will see the gelding begin from the outside of the second row.

First-up since July when third to his stablemate last weekend, Im Full Of Excuses has fared slightly better in barrier five.

The son of Jeremes Jet slots into four with the removal of the emergency.

“After such a long break Im Full Of Excuses will be a major improver,” Butterworth said. “He’s drawn well enough and will be very hard to beat.

“Jimmy Mack couldn’t be going any better, but I’d be more confident he can keep his winning streak going if he hadn’t drawn wide on the back line.

“The draw has made for an interesting race that’s for sure.”