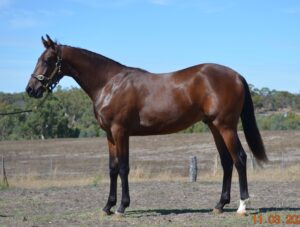 A member of one of South Australia’s most successful classic-winning families, Lot 10 at the Silver Salver SA Yearling Sale on Sunday, March 27 at Globe Derby Park, is certain to attract plenty of admirers.

The sole offering of Mandy and Scott Pascoe’s Ningana Park, Birdwood, the colt is one of the second crop of the Derby winner and Vicbred champion Major Secret.

On his dam’s side the colt has something in his favour. He is out of the Rocknroll Hanover mare Rockfromcork, a placegetter in the Southern Cross Final at two years and a half-sister to the Ladyship Stakes and Mermaid Stakes winner Arm A Princess.

Their dam, Arm A Corka, was a daughter of the fine racemare Uncork, who won 18 races including the Sapling Stakes and Media Guild Cup and became the dam of 13 individual winners including seven with records of 2:00 or better.

The colt is eligible for the Southern Cross , Vicbred and the 2yo Silver Salver Sales Race

Printed copies of the catalogue are now available.

The online catalogue can be viewed at sabotra.org.au/2022silversalveryearlingsalecatalogue

For a catalogue or further information contact sale co-ordinator Gary Newton on phone 0402 978 424.