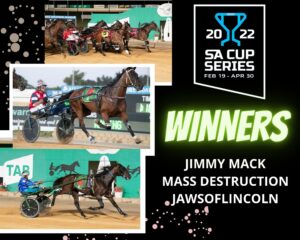 Corey Johnson has taken his driving to another level in recent weeks, and his talents were on display aboard Star Writer in Race 1 Saturday night in the Claimer. After sitting on the back of stablemate Jake Sportswriter, Star Writer was able to use the sprint lane to advantage to provide a quinella for the Shane Loone stable. A competitive race to kick off proceedings on Italian Cup night.

One of the better supported runners at Globe Derby Saturday night was in Race 2, Soho Bob got the job done for Dani Hill and Jill Neilson. This consistent 4yo is building up a solid record, with that his 5th career victory. As Lincoln Moore predicted pre-race on the Live Stream, if Dani was able to find the front comfortably on Bob, he would be very hard to beat.\ Vapar Jack and Hilltop Breeze filled the placings, with performances that suggest a win is just around the corner.

Another winner for Team Teal!

In the upside of the night, Fine Artist with David Smith in the seat in Race 3, nabbed hot favourite Whistle On By in the shadows of the post. This was the first of a winning double for popular trainer Peter Borrelli.

A fine display indeed. Mass Destruction and Ryan Hryhorec led for the majority of the 2645m Gramel Trotters Cup. Both horse and driver made light of the 10m handicap in a masterclass of horsemanship and trotting. The first lot of 10 points for the SA Cup series goes to Mass Destruction!

WHAT.A.RACE!!!  There were fireworks from the outset in the first heat of the SA Cup for pacers in Race 5, the Globe Derby Fodder Italian Cup (2230m).  The Les Harding trained I’m Full Of Excuses was sent to the front early, which gave race favourite Jimmy Mack the back of his stablemate. With that in mind, Ryan Hryhorec whipped around the field on Somewhere Secret to sit outside the leader and increase the tempo from the 1200m. Inside the final lap the Paul Cavallaro trained Wrangler made a 3-wide move with Zadaka getting on his back.

Turning for home there were many chances. Just as Wrangler looked to get the upper-hand, Jimmy Mack drove through the sprint lane and made a lunge at the post that would see him score a thrilling half-head victory, his 9th in a row at Globe Derby!

The great runs didn’t end there however. I’m Full Of Excuses held on bravely for 3rd, Zadaka was very solid in 4th, Maharajah was never fully tested in an eye-catching 5th, Somewhere Secret (6th) will improve significantly with the run, Sir Lucas (7th) had more to offer, Cullenburn (8th) got going late, Belladonna Girl (9th) and Hezacrocwatcher (10th) also had more to offer.

With just 8.8metres from first to last, it opens the SA Cup series for the pacers wide open.  More to come…

A drama-filled SAHRC Derby saw 2 of the 7 runners put out of contention early in the first turn out of the straight. This left Jawsoflincoln in front and in total control. The Greg Scholefield trained 3yo ran a blitzing last half of 56.4 to send an ominous warning to his counterparts. He has the class, he has the speed, and he has the first lot of 10 points for the series; does Jawsoflincoln have what it takes to stretch to the 2230m of the SA Derby on April 30.

With Peter Borrelli and Corey Johnson both enjoying wins earlier in the night, the two paired up in Race 7 with Grinfaron to provide both with a winning double.

Super Angus recorded his third victory of 2022, with a popular and comfortable all-the-way win. Sam Pascoe has built a fantastic relationship with the Scott Pascoe trained trotter, and it was fantastic to see some happy owners on course to celebrate.